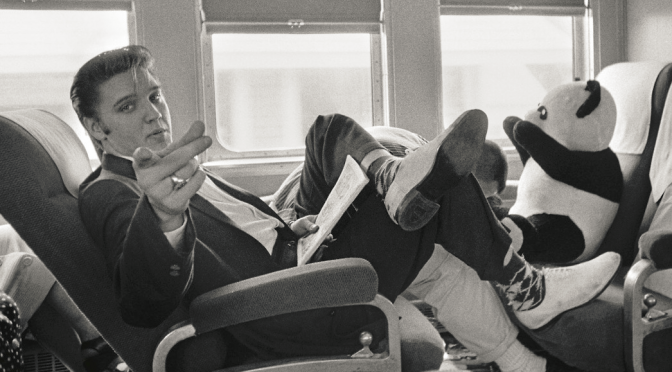 Today is David Bowie’s 68th birthday. It also would’ve been Elvis’ 80th birthday, had the King maybe cheated on his diet of barbiturates and Fool’s Gold Loaf sandwiches.

Smarter and more qualified people than I have already discussed their respective iconographies and legacies. Elvis and Bowie each left a monstrous footprint on rock during the genre’s most impressionable ages. One helped bear it into the world, and the other took it to space and gave it hard drugs.

I dig each of their discographies for different musical reasons, but the central raison d’être for my appreciation is my dad. I’d bet even money he wore an Elvis tie to work today and adopted the burden of ensuring his students are, if not appreciative, at least aware of both artists’ lasting contributions.

As I get older and assimilate more pop-culture worlds into my database (and yes, that’s exactly how I envision it — that’s the only way I can justify watching a WKRP In Cincinnati marathon in the year 2015, so shut up), my dad always knows exactly when to send me through wormholes into some of the planets he conquered when he was my age. Part of my Christmas present this year, for instance, was a John D. MacDonald starter kit.

Almost without exception, his suggestions are valued, and they literally stretch back since before I can remember.

IIRC, I got into Bowie on my own, and he was a heavyweight in my middle-school foray into ’80s radio hits. In fact, I once made a tragically short-sighted bet that I could listen to Queen and Bowie’s “Under Pressure” once per day for the rest of my life. That should give you a good idea of the ignorant/stubborn/naive composite that was me at 14.

I raided my dad’s Bowie albums shortly after, right when “Ziggy Stardust” appeared on the first Guitar Hero. (Hell yes, I got in on the ground floor of that franchise. ) That got me into Spiders From Mars and Diamond Dogs, which begot Thin White Duke and Aladdin Sane and totally and completely detonated my perceptions of what a solo artist could do with his career.

And while I have traveled through the loose ends of Bowie’s career on iTunes and Spotify, it’s my dad who’s sent me the cool backstage photos and isolated instrumental tracks as Scenic Route signposts along my journey.

My Elvis education was a similar experience, but I was more deliberate in my tuition. I knew his standards growing up, but in college, I explicitly asked my dad for a flash drive of Elvis. Since this is the man who almost named me Elvis, he was proud to oblige.

Nowadays, Elvis is less accessible than Bowie, both musically and also, you know, literally, and getting through some of his live stuff was an admitted slog. His loose stage confidence is always affecting, though, and he found himself alone on shuffle during my trip to Memphis in 2011.

I was wondering today what the music landscape would be like if he were still alive. Would he still be recording music like McCartney?  Would he have had to suffer an ugly talent declination in front of aging Vegas crowds like Sinatra?

I doubt Elvis was deft enough to pull off Bowie’s magic act — that maintenance of critical and public admiration accomplished by keeping a low profile and answering to no one. I choose to think Elvis would have aged gracefully into his role as an aging music monarch. I know my dad would still love him, and so would I.